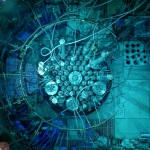 SEMPER FIDELIS is part of the HORIZON 2020 project HERACLES CP and is irradiated in the BR2 reactor of SCK-CEN. Together with EMPIrE, it completes the comprehension phase for UMo dispersion fuel. EMPIrE is a complimentary test and also focuses on dispersion fuel, but also contains some monolithic fuel plates that were manufactured in Europe. EMPIrE is currently being irradiated in the ATR reactor of Idaho National Lab.